Léon Spilliaert was born in Oostend, the oldest of seven children of Léonard-Hubert Spilliaert, who was a perfumer. From childhood he displayed an interest in art and drawing. A prolific doodler and autodidact, he was predominantly a self taught artist. Sickly and reclusive, he spent most of his youth sketching scenes of ordinary life and the Belgian countryside. When he was 21 he went to work in Brussels for Edmond Demon, a publisher of the works of symbolist writers, which Spilliaert was to illustrate. He especially admired the work of Edgar Allan Poe. Watercolour, gouache, and charcoal were the means by which he produced much of his best work, including a number of self-portraits executed in black crayon in the early years of the twentieth century. A significant influence on Spilliaert was Odilon Redon, whose expressive use of black finds parallels in his own work. Frequently depicting a lone figure in a dreamlike space, Spilliaert's paintings convey a sense of melancholy and silence. Among the best known works of Léon Spilliaert are the images "Digue la nuit" and "Clair de Lune et Lumières". Both works are now exhibited at the Musée d' Orsay in Paris. Most of Spilliaert's works are marked by an oppressive alien and elegiac atmosphere. This also applies to "Digue la nuit" from 1908. Here the painter removes any naturalistic characteristics of the landscape depicted in the image and creates a stylization in which the location, that serves as a template, is being completely redesigned. Redesigned in a way, by means of which he becomes the mirror of a state of mind. Solitude, mystery, hallucination - all this eats into the landscape. "Clair de Lune et Lumières" was created around 1909. Here the colonnade and arcades of the façade of the Kursaal ballroom on the seawall in Oostend served Spilliaert as a basis for the composition of this urban landscape. In this pastel painting he catches the eerie transformation of the architecture at night and the strangeness that comes from artificial lighting. With its cosmic, metaphysical traits "Clair de Lune et Lumières" reveals the influence of Vincent Van Gogh. In particular, one feels partly reminded of "Starry Night" during perception. In the period 1902-1909 Spilliaert is concentrating on creating complex, profound self-portraits of introspective nature. His self-portrait of 1903 stands out here. In this picture Léon Spilliaert uses a dramatic self-presentation with ghostly apparitions in the background and a wry face in three-quarter pose. This image can be clearly identified as a prototype for the three-quarter-portraits, which Spilliaert created later. His later work shows a concentration on seascapes. Spilliaert died in 1946 in Brussels. 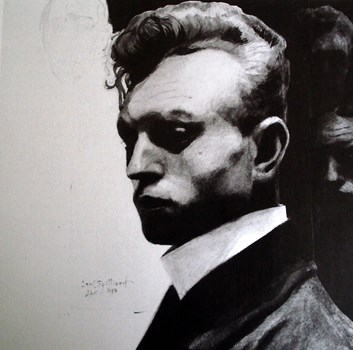