Jean-Pierre Cassigneul first studied at The "Académie Charpentier", then made the decision that he wanted to study under Jean Souverbie who was a Professor at the The "Ecoles des Beaux-Arts" of Paris. His style is known to have taken on some interesting influences from the late 19th, early 20th Century, namely the Post-Impressionist Group called ‘Les Nabis’. The group of artists included Vuillard, Bonnard and Vallotton to name but a few and were considered very ‘avante garde’ at the time. Cassigneul’s first solo exhibition took place when he was just 17 years. From then on his work was shown extensively throughout Europe. Having had a private exhibition at the Galerie Tivey-Faucon in Paris it was here that he met another art dealer, Kioyoshi Tamenaga, who represented his work in Japan. The artist also exhibited in New York. His colour palette is bright and vivid and his compositions consisted of perhaps a dark outline to define the shape of a sailboat or a woman’s silhouette in a floral hat. His work was illustrated in several books and he was known to be an engraver, lithographer as well as an illustrator. Cassigneul painted several commissions for theatres and hotels and at the age of 70 years an exhibition was organised to celebrate his fifty years of work, the exhibition travelling through seven major cities in Japan. 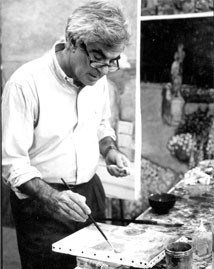