Alighiero Boetti was born in Turin in 1941. At a young age, Boetti began to study artists such as Lucio Fontana, Arshile Gorky and Mark Rothko. Inspired and looking for his own artistic style, Alighiero Boetti went to Paris in 1962, where he trained auto-didactically. During his two years in Paris, Alighiero Boetti mainly studied Jean Dubuffet's object art. From 1963 to 1965, Boetti began to create works out of then unusual materials such as plaster, masonite, plexiglass, light fixtures and other industrial materials. His first solo show was in 1967, at the Turin gallery of Christian Stein. Later that year participated in an exhibition at Galleria La Bertesca in the Italian city of Genoa, with a group of other Italian artists that referred to their works as "Arte Povera", a term subsequently widely propagated by Italian art critic Germano Celant. Boetti continued to work with a wide array of materials, tools, and techniques, including ball pen and even the postal system. Some of Boetti's artistic strategies are considered typical for Arte Povera, namely the use of the most modest materials and techniques, to take art off its pedestal of attributed "dignity". Boetti also took a keen interest in the relationship between chance and order, in various systems of classification and non-Western traditions and cultural practices, influenced by his Afghanistan and Pakistan travels. In 1967 Boetti discovered the principle of seriality for himself and has called himself "Alighiero e Boetti" ever since. In 1968 he produced his most important work "Gemelli" (twins), a black and white photo montage, in which he doubled his portrait and questioned the uniqueness of himself. From 1970 he produced his first biro pictures and from 1973 his famous embroidery pictures appeared, which developed into embroidered maps in the beginning of the 1990s. The outsized embroidered pictures were produced by female embroiderers in Afghanistan, where Alighiero Boetti had first traveled in 1971. Boetti designed his works on the basis of mathematical and conceptual principles, before they were implemented in Afghanistan. From 1987 Boetti has been working with the Iranian Mahshid Mussari, who collected various motif patterns for his last and largest embroidery, which was commissioned in Afghanistan in 1993. Alighiero Boetti, however, did not live to see the completion of this work, which took 10 months. He died from the consequences of a brain tumor in Rome in 1994. In 2010, Boetti's "Mappa" from 1989 was sold at Christie's London for 2.75 million USD. That same year, one of his ball pen paintings, "Ononimo" from 1973, sold for 1.6 million USD. In 2011, "Tutto" from 1988 set a new record for Boetti's work at 2 million USD. 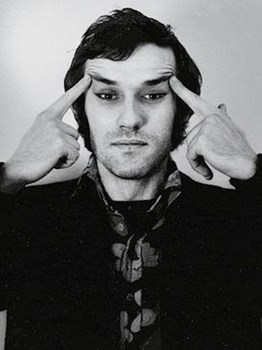