Jean-Gabriel Domergue was born in Bordeaux and would eventually create a style of advertising art that would become a vintage symbol of French life. He would become known for his beautiful depictions of women, nude and elegantly dressed alike. Domergue studied under fellow artists, Robert-Fleury, Lefèvre, Adler and Flameng, and had his first exhibition in 1906 at the "Salon des Artistes Français". Though he would initially try his hand at being a landscape painter, Domergue found great success and fortune painting fashionable portraits and advertising of young French sirens. He has been compared to the likes of Henri Tolouse-Lautrec for bringing feminine sexual icons (in Domergue’s case, fashion models and dancers) into the artistic realm. It is even said that Domergue claimed to be the original inventor of the pin-up model. The famous dancer Josephine Baker also posed for Domergue in the nude. Domergue’s nudes can be easily distinguished by their nubile, thin and elongated appearance and their swan-like necks. In 1927, Domergue moved to Cannes where he would live the rest of his life, close to his beautiful young subjects on the Mediterranean. Living on the Côte d’Azur gave Domergue even more inspiration and new subjects to portray in his advertisements and compositions. Among some of his more famous advertisements were for the Côte d’ Azur and for the French department store "Galleries Lafayette". Domergue was very prolific during his lifetime, creating a number of posters, etchings and oil paintings. He continued to work nearly until his death, leaving a legacy of beautiful advertisements and portraits which symbolize an era in France now long gone. 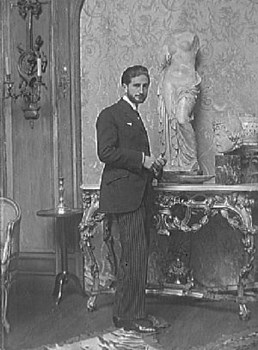