César Baldaccini was a French sculptor, born in 1921 of Italian parents in the working-class neighbourhood of la Belle-de-Mai in Marseilles, better known as "César". After studying at the Ecole des Beaux-Arts in Marseille from 1935 until 1939, he went on to the Ecole des Beaux-Arts in Paris from 1943 until 1948. He began making sculptures by welding together pieces of scrap metal in 1952 and first made his reputation with solid welded sculptures of insects, various kinds of animals, nudes, etc. His first one-man exhibition was at the Galerie Lucien Durand in Paris in 1954. His early work used soldered and welded metal as well as junk materials, and by 1960 César was considered one of France's leading sculptors. In that year, on a visit to a scrap merchant in search of metal, he saw a hydraulic crushing machine in operation, and decided to experiment with it in his sculpture. He astonished his followers by showing three crushed cars at a Paris exhibition. It was for these 'Compressions' that César became renowned. César selected particular cars for crushing, mixing elements from differently coloured vehicles. In this way he could control the surface pattern and colour scheme of the piece. Later the same year he joined the Nouveaux Réalistes (New Realists) - Arman, Klein, Raysse, Tinguely, Pierre Restany and others who found their inspiration in urban life. In 1965, he started to work with plastics, first with plastic moulds of human imprints, then from 1966 by pouring expanded polyurethane, which was allowed to expand and solidify. He gave up making welded-metal sculpture in 1966 and organised a series of Happenings from 1967-1970, in which he produced expansions in the presence of an audience. His later works also included sculptures made out of molten crystal. In 1995, he was asked to paint a Mclaren F1 GTR that participated in the famous 24 Hours of Le Mans. The car Chassis GTR5 is still in the livery created by Cesar, and represents the only 'Art Car" based on the iconic Mclaren. He is the creator of the César du cinéma trophy, which is awarded to the best in French cinema. He was made Chevalier of the Légion d'honneur in 1978 and promoted Officier in 1993. One can see examples of his work at a number of places such as le Centre national d'art et de culture Georges-Pompidou (Bas relief, Tortue, le Diable), at the Musée d'art moderne de la Ville de Paris, on the esplanade de La Défense (Le Pouce). 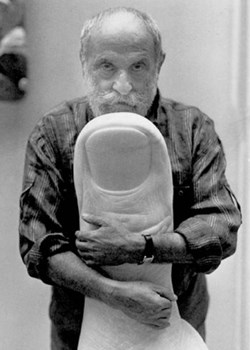