Karel Appel was born in Amsterdam in 1921. From 1940 until 1943 he studied at the "Rijksakademie van Beeldende Kunsten" in Amsterdam. In 1946, his first solo show was held at "Het Beerenhuis" in Groningen and he participated in "Jonge Schilders" at the "Stedelijk Museum" in Amsterdam. About this time, Appel was influenced first by Pablo Picasso and Henri Matisse, then by Jean Dubuffet. He was a member of the "Nederlandse Experimentele Groep" in 1948 and established the Cobra group from 1948 until 1951, together with Constant Nieuwenhuys), Corneille, and other painters from Copenhagen, Brussels, and Amsterdam. The style distinguished itself through bold, expressive compositions inspired by folk and children's art, as well as by the work of Paul Klee and Joan Miró. In 1949 Appel completed a fresco for the cafeteria of the city hall in Amsterdam, which created such controversy that it was covered for ten years. In 1950 the artist moved to Paris, there the writer Hugo Claus introduced him to art critic Michel Tapié, who organized various exhibitions of his work. Appel was given a solo show at the "Palais des beaux-arts" in Brussels in 1953. He received the UNESCO Prize at the 1954 Venice Biennale and was commissioned to execute a mural for the restaurant of the "Stedelijk Museum" in 1956. The following year Appel traveled to Mexico and the United States and won a graphics prize at the Ljubljana Biennial in Yugoslavia. The first major monograph on Appel, written by Claus, was published in 1962. In the late 1960s, the artist moved to the "Chateau de Molesmes", near Auxerre. Solo exhibitions of his work were held at the "Centre national d'art contemporain" in Paris, the "Stedelijk Museum" in 1968, at the Kunsthalle Basel and the "Palais des beaux-arts" in 1969. During the 1950s and 1960s he executed numerous murals for public buildings. A major Appel show opened at the Centraal Museum in Utrecht in 1970, as well as a retrospective toured Canada and the United States in 1972. In the 1970s and 1980s, Appel continued to work simultaneously in sculpture and painting, pushing his abstraction further with his window paintings. Appel also gradually introduced landscape into his iconography, which would develop into a more consistent engagement in the last decade of his work. In the 1980s, Appel also began his collaborations with American poet Allen Ginsberg, which would continue over the next ten years. In his later career, his work was the subject of numerous solo exhibitions. Appel died in Zurich in 2006. 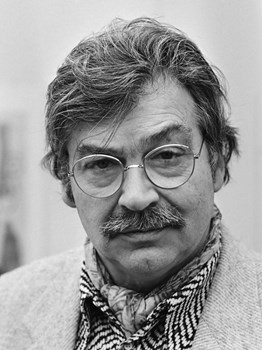