Arnaldo Pomodoro is an Italian sculptor. He was born in Morciano di Romagna in 1926. He currently lives and works in Milan. His brother, Giò Pomodoro was also a sculptor. Pomodoro designed a controversial fiberglass crucifix for the Cathedral of St. John the Evangelist in Milwaukee. The piece is topped with a fourteen foot in diameter crown of thorns which hovers over the figure of Christ. Some of Pomodoro's "Sphere Within Sphere" can be seen in the Vatican Museums, Trinity College in Dublin, the United Nations Headquarters and Mt. Sinai Hospital in New York, the Hirshhorn Museum and Sculpture Garden in Washington, D.C., Christian Theological Seminary in Indianapolis, the de Young Museum in San Francisco, Tehran Museum of Contemporary Art, American Republic Insurance Company in Des Moines, the Columbus Museum of Art in Columbus, the University of California in Berkeley, the Virginia Museum of Fine Arts in Richmond, and the Tel Aviv University in Israel. In Copenhagen he has created sculptory for the Amaliehaven park which was inaugurated on the waterfront in front of Amalienborg Palace in 1983. His thematic work "Forme del Mito" was displayed at Brisbane's World Expo in 1988 and was later purchased by Brisbane City Council for the City of Brisbane. Museum of Outdoor Arts also has a piece by Pomodoro in their collection entitled Disco Emergente which is on permanent public display in Greenwood Village in Colorado. In 1999 he founded Fondazione Arnaldo Pomodoro in Milan. Originally conceived as a centre to document and archive the work of the artist, it opened an exhibition space in 2005, hosting exhibitions of prominent artists such as Jannis Kounellis, Lucio Fontana and Robert Rauschenberg. The director of Fondazione Arnaldo Pomodoro is Flaminio Gualdoni. 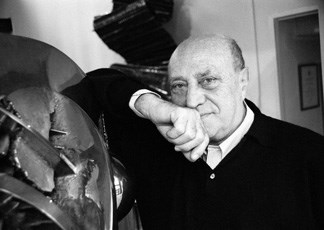