Umberto Mariani is an Italian visual abstract artist and a post-war multimedia artist whose work exudes a special affinity to the folds of textiles evoking the essence of three dimensional Spatialism of the Italian avant-garde. Mariani was born in 1936 in Milan, Italy. In 1958 he graduated with honours from the Accademia di Brera under the direction of Achille Funi. Mariani is best known for his multidimensional folds of fabric carved out of lead sheets. Although he studied the masters of the Romantic period and was surrounded with the emerging movements of Pop Art and Surrealism, Mariani’s work was mostly inspired by the Classical Greek statues he grew up observing on the streets of Italy. Fascinated by the delicate folds of fabric of these statues carved out of white marble, Mariani developed a desire to manipulate the material. During the 1960s, Mariani picked up his first projects doing monumental narrative work for the St. Peter's Basilica in Vatican City as well as mosaics and frescos. In 1970 Mariani exhibited widely in prominent institutions in Europe such as the Palais des Beaux Arts in Brussels and the Musée Moderne in Paris. In 1974, Mariani started to make paintings where the fold and drapery were the absolute protagonists as he started to develop this old interest he had for Classical Greek statues. Mariani believes that true artwork require study in addition to passion. By the 1990s he gave up on painting while he works in his laboratory formulating new ideas, shapes and colors coming out incessantly from lead. It was during this time period that he develops his very unique artworks that come to define his signature style and composition. Recently he is best known for his monochromatic complex draperies on irregular-shaped canvases. Through the topography and the bumps of his work Mariani explores illusions of light and shadow created within the folds of fabric. His new multi-dimensional works include lead sheets beneath intricate drapery, whereby the fabric both serves to conceal a mysterious object beneath while also evoking its presence. Umberto Mariani currently lives and works in a former factory in Milan and has become the subject of numerous academic essays in Italy. 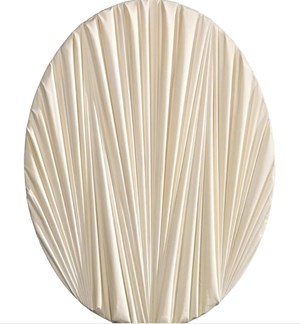 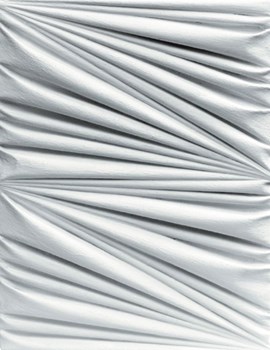 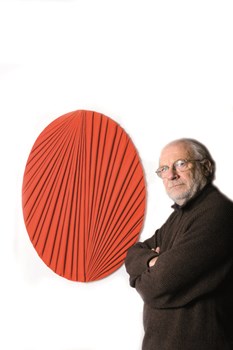