Following a visit to the Paris studio of Yves Klein in 1957, Bernard Aubertin was inspired to follow in Klein’s footsteps and passionately work within the field of monochromy, a style that he adamantly adhered to throughout his career, choosing a vibrant red hue just as Klein famously worked in blue. He covered all over nail paintings with these characteristically bright red surfaces, creating monochrome yet intriguing compositions. As outlined in Aubertin’s writings, he sought to bring out the absolute “destiny” of the color, and in turn, what he calls the “pictorial essence” and a psychic/sensuous value, through monochromy. Within the color red there exists a compelling dichotomy. On the one hand it evokes violence as the color of blood and fire and on the other it embodies an infinite and anonymous purity. By the 1960’s, Aubertin had introduced fire into his repertoire, a medium that effectively becomes the physical manifestation of his chosen color. Many of the works consist of abstract compositions using matches that were later burned, creating variations caused by the spontaneous nature of flame. The process by which the works are created is inherent in the final product and the viewer can clearly see the charred transformation that took place. In effect, the destructive nature of fire becomes a mode of creation and rebirth. By 1962, Aubertin was recognized as a member of the, originally German, international Zero movement, exhibiting with them and regularly corresponding with artists such as Heinz Mack, Otto Piene and Piero Manzoni. He shared a similar rejection of art as language and instead strived to create works that embody simplicity and austerity. Aubertin’s red works give rise to pure vibration and anonymous energy in a way that is emblematic of the movement. Since the 1960s, his work has been widely exhibited throughout Europe and the United States, including the Solomon R. Guggenheim Museum in New York, the Stedelijk Museum in Amsterdam, and the Palais de Tokyo in Paris. Aubertin’s work is included in the permanent collections of the Musee de Graz, the Museum of Dusseldorf, and the Centre National de l’Art Contemporain in Paris, among others. 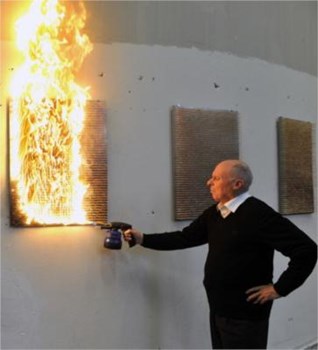