Jean-Michel Folon was a Belgian artist, illustrator, painter and sculptor. Folon was born in Brussels where he studied architecture at the Institut Saint-Luc. In 1955 he settled in a gardener’s house in the outskirts of Paris. Over a period of five years he drew morning, noon and night. In 1985 he moved to Monaco where he worked in a large workshop surrounded by numerous artists. In the 1990s, Folon decided to create a foundation in the Solvay Domain, La Hulpe. The first exhibition of his watercolours was in New York in 1969 in the Lefebre Gallery. One year later he exhibited in Tokyo and in the Il Milione gallery in Milan. He also participated in the XXVth Venice Biennale. In 1973 he joined the selection of Belgian artists in the XXVth São Paulo Biennale, where he was granted the Grand Prize in Painting. Over the years his work concentrated on different techniques, including watercolour, etching, silkscreen, illustrations, mosaics, and stained glass, which showed the diversity of his art. He also designed numerous posters, often for humanitarian causes. Around 1988 he created his first sculptures made out of wood. He then moved on to creating sculptures in clay, plaster, bronze and marble, while continuing to paint. Several museums dedicated exhibitions to him, among them the Musée des Arts Décoratifs in Paris in 1971, the Boymans van Beuningen in Rotterdam in 1976, the Institute of Contemporary Arts in London in 1977, the Musée Picasso in Antibes in 1984, the Museo Correr in Venice in 1986, the Museo de Bellas Artes in Buenos Aires in 1987, the Metropolitan Museum of Art in New York in 1990, La Pedrera in Barcelona in 1993, the Bunkamura in Tokyo in 1995, the Musée Olympique in Lausanne in 1996 and the Museo Morandi in Bologna in 1996–97. In 1999 an exhibition of large sculptures was presented in the Galerie Guy Pieters in Saint-Paul de Vence. In 2000 he opened the Fondation Folon, which presents the essentials of his work in the region he grew up in. In 2001 the city of Lisbon held a large retrospective of his sculptures in the Castelo de São Jorge, which dominates the city. In 2003 he created the designs for Puccini's La Bohème for the Puccini Festival in Italy. The president of the French Republic, Jacques Chirac, awarded him the Legion of Honour in the Palais d'Elysée. In 2004 he became a UNICEF ambassador. In 2005 the city of Florence held a grand retrospective of his work at the Palazzo Vecchio and the Forte di Belvedere. Folon published his drawings in newspapers, mostly in the USA, where he was recognized earlier than in Europe and illustrated books by Franz Kafka, Ray Bradbury, Jorge Luis Borges, Guillaume Apollinaire, Jacques Prévert, Boris Vian, Guy de Maupassant, Albert Camus, Herbert George Wells and Jean de la Fontaine. He never really changed his style, whose most famous emblem is the "bird-man" but used all kinds of supports; Folon made murals (Magic City for the Brussels subway, 1974; Waterloo Station for the London tube, 1975), posters for theater and opera (Spoleto Festival, 1978; Teatro Olimpicio, 1987) and cinema (The Purple Rose of Cairo, by Woody Allen, 1985), theater and opera scenery (Geneva and Brussels, 1981; Venice and Roma, 1989), short films for TV (opening and closing sections for the French channel Antenne2, 1975–1984), wooden sculptures, logotypes (Bicentenary of the French Revolution, 1989; Philexfrance, 1989), tapestries (Congress Hall of Monaco, 1989), ships (1990), church windows (1992), sculptures (La mer, ce grand sculpteur, Knokke, 1997), and even a Palio flag (Sienna, 1999). His artistic value was recognized by several exhibitions organized in the most famous galleries and museums in the world. 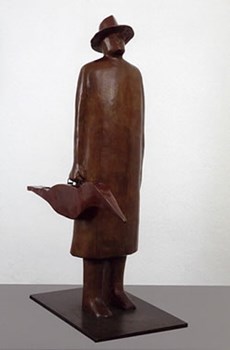 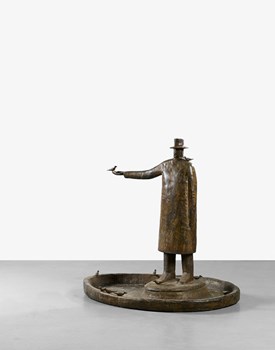