Paul Delvaux was born in 1897, in Antheit, Belgium. At the "Académie Royale des Beaux-Arts" in Brussels he studied architecture from 1916 to 1917 and decorative painting from 1918 to 1919. During the early 1920s, he was influenced by James Ensor and Gustave De Smet. In 1936 Delvaux shared an exhibition at the "Palais des Beaux-Arts" in Brussels with René Magritte, a fellow member of the Belgian group "Les Compagnons de l’Art". Delvaux was given solo exhibitions in 1938 at the "Palais des Beaux-Arts", Brussels, and the London Gallery, the latter organized by E. L. T. Mesens and Roland Penrose. That same year he participated in the "Exposition internationale du surréalisme" at the "Galerie des Beaux-Arts" in Paris, organized by André Breton and Paul Eluard, and an exhibition of the same title at the Galerie Robert in Amsterdam. The artist visited Italy in 1938 and 1939. His first retrospective was held at the "Palais des Beaux-Arts" in Brussels in 1944. Delvaux executed stage designs for Jean Genet’s "Adame Miroire" in 1947 and collaborated with Eluard on the book "Poèmes, peintures et dessins", published in Geneva and Paris the next year. After a brief sojourn in France in 1949, the following year he was appointed professor at the "Ecole Supérieure d’Art et d’Architecture" in Brussels, a position he retained until 1962. From the early 1950s he executed a number of mural commissions in Belgium. About the middle of the decade Delvaux settled in Boitsfort. From 1965 to 1966 Delvaux served as president and director of the "Académie Royale des Beaux-Arts" of Belgium, and about this time he produced his first lithographs. Retrospectives of his work were held at the Palais des Beaux-Arts in Lille in 1965, at the "Musée des Arts Décoratifs" in Paris in 1969, and at the Museum Boymans-van Beuningen in Rotterdam in 1973. Also in 1973 he was awarded the Rembrandt Prize of the Johann Wolfgang Stiftung. A Delvaux retrospective was shown at the National Museum of Modern Art in Tokyo and the National Museum of Modern Art of Kyoto in 1975. In 1977 he became an associate member of the "Académie des Beaux-Arts" of France. Delvaux died in Veurne, Belgium, on July 20, 1994. 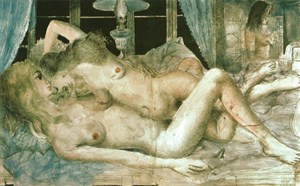