Degas was born on July 19, 1834 in Paris. In 1855-56, he studied at the École des Beaux-Arts in Paris. He lived in Italy from 1854 to 1859 where he studied the Italian fifteenth Century Renaissance. He was also influenced by academic painter J. A. D. Ingres (1780-1867), following the poussiniste belief in line as the basis of form in painting (rather than colour, as was believed by the rubenistes.) Degas’ early paintings were portraits and historical scenes – regarded highly by the establishment at the time - marked by a strictness of composition. But as he absorbed the perception of his surroundings and of the everyday life of man, Degas’s later work in the 1860s allied him with the Impressionists the following decade. Fascinated by the diversity and activity of city life, he painted the ever-changing aspects of the Paris of his day (its streets, theatres, cafés, and race tracks), re-creating the atmosphere of a capitalist city from the eyes of the flaneur. Degas depicts people’s characteristic behaviour and appearance, born of the particular conditions of their work and of everyday occurrences. Focusing on the “occupational” gesture, he poses subjects with a business that combines movement and beauty. A type of nineteenth Century humanist, Degas focuses great attention to his subjects (often members of the lower classes) and asserts the aesthetic meaningfulness of their ordinary lives. Particularly memorable are his many ballet scenes, conveying the festive and magnetic atmosphere of the theatre. While revealing beauty, the artist as an objective and subtle observer captures the parallel exhausting, monotonous labour hidden behind the elegant spectacle. A displaced composition (asymmetric and with the dynamic, fragmentary quality of a motion-picture frame), precise and supple lines, unexpected foreshortening and active interplay of figure and space, give Degas’ works a combination of spontaneity with precise calculation. His works from the 1870s show a subtle restraint of colour, developing to gradually augment with the effects created by strong artificial light. The works of the 1880s and 1890s depict ballet dancers and nudes at their toilette (bath). These drawings, executed primarily in pastel, take on a tense quality as Degas takes the role of voyeur, looking subjects oblivious to being watched. From the late 1880s to the beginning of the 20th Century Degas also cast various bronze sculptures. In these figures of dancers, bathers and horses, Degas strove to achieve a plastic expressiveness. Conveying fleeting motion and the sharpness and unexpectedness of a pose, he also preserves the figure’s plastic wholeness and clear-cut quality. 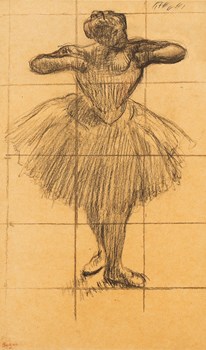