Les Lalanne are an artist duo comprising married couple François-Xavier Lalanne and Claude Lalanne. Francois-Xavier Lalanne was born in Agen, France, and received a Jesuit education. At age 18, he moved to Paris and studied sculpture, drawing and painting at Académie Julian. Francois-Xavier rented a studio in Montparnasse, next door to friend Constantin Brancuși, after completing mandatory military service. Brancuși introduced Lalanne to artists such as Max Ernst, Man Ray, Marcel Duchamp, and Jean Tinguely. He met Claude Lalanne at his first gallery show in 1952. The show signified an end of painting for François-Xavier as he and Claude began their career sculpting together. He became known to the larger public in France in 1976 when the singer Serge Gainsbourg selected a work by Lalanne, the man with the head of a cabbage, for the title and cover of an album in 1976. In 1983 he was commissioned by the French Ministry of Culture to design new monumental fountains for the square in front of the Hôtel de Ville, Paris, and also to design gardens for the reconstructed Les Halles in the center of Paris. Claude Lalanne was born in Paris in 1924 and studied architecture at the "École des Beaux-Arts" and at the "École des Arts Décoratifs". She involved herself in the artist community in Impasse Ronsin, Montparnasse, Paris and became friends with American artists Larry Rivers and Jimmy Metcalf who helped her develop the art of electro-plating. Les Lalanne were known to co-create on projects rather than collaborate. While Francois-Xavier favored sculpting animal themes, Claude preferred vegetation. The themes explored by the two collectively went against the current trend of Abstract art in the 1960s. The couple believed and Francois-Xavier claimed, "the supreme art is the art of living." The couple began attracting public attention in Paris during the 1960s when Yves Saint-Laurent and Pierre Bergé commissioned them. In particular, Francois-Xavier's realistic bronze cast sheep covered in skin alongside lily vanes cast by Claude were displayed in the library of Yves Saint-Laurent and Pierre Bergé. Their first exhibition together included Francois-Xavier's famous rhinoceros desk, Rhinocrétaire, and Claude's cabbage with chicken legs sculpture. Similar themes by Les Lalanne have classified their works as an ode to Surrealism and Art Nouveau. In recent years, the works of Les Lalanne have been exhibited in different venues in New York City. In 2009, the artist duo participated in Park Avenue Recession Art, an effort developed by the Paul Kasmin Gallery, the New York City Parks Department’s public-art division and the Fund for Park Avenue Sculpture Committee. The project involved a series of sculptures in between crosswalks on Park Avenue. The pieces featured were a bronze apple called "Pomme de New York" on 52nd Street, "Moutons" on 53rd Street, "Choupatte" on 56th Street, and "Singe Avisé" on 58th Street, which was François-Xavier's last sculpture. In the Fall of 2013, Mr. LaLanne's sheep were the inaugural public installation of "Getty Station", a former gas station conceived by real estate developer and art collector Michael Shvo in Manhattan's Chelsea district. 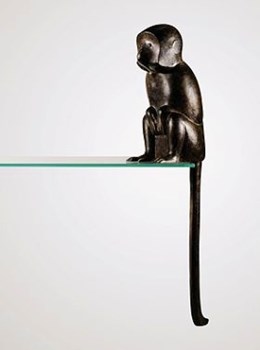 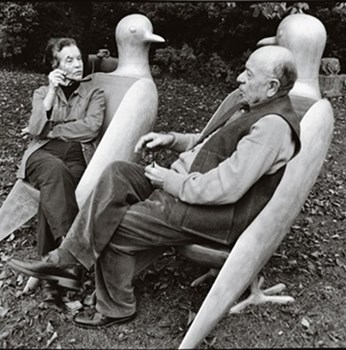