Born in Milan, into a notably artistic family, Rembrandt Bugatti was the second son of Carlo Bugatti. His older brother was Ettore Bugatti who became one of the world's most famous automobile manufacturers. He was given his first name by his uncle, the painter Giovanni Segantini. His father was a successful and important Art Nouveau furniture and jewelry designer who also worked in textiles, ceramics, and silver metalware. As such, Rembrandt Bugatti grew up in an environment where a great many of his parent's friends were from the artistic world. In 1902, the family moved to Paris, where they lived in a community of artisans. As a child he hung around his father's workshop and was encouraged to try sculpting in plasticine by the family friend and renowned Russian sculptor, Prince Paolo Troubetzkoy. Rembrandt Bugatti was a young man when he began to work with the art foundry and gallery owner, Adrian Hébrard. He produced a number of bronzes which were successfully exhibited and promoted by Hébrard. Bugatti's love of nature led to him spending a great deal of time in the wildlife sanctuary near the "Jardin des Plantes" in Paris or at the Antwerp Zoo where he studied the features and movement of exotic animals. His sculptures of animals such as elephants, panthers and lions became his most valuable and popular works. The silver elephant mascot that sits on top of the radiator of the Bugatti Royale was cast from one of Rembrandt's original sculptures. His art works are now also highly priced. A cast of his 1909-1910 bronze, "Sacred Hamadryas Baboon, was auctioned at Sotheby's in 2006 for $2.56 million. In May, 2010, the Baboon sculpture reappeared at auction at Sotheby's along with a male and female Nubian Lion and a giraffe and seven other pieces from the S. Joel Schur Collection, perhaps the finest collection of masterpieces by Bugatti in private hands according to one report. One of the Bugatti pieces was reported sold apparently as part of a group of sculptures (with three Rodin and a Noguchi) for an aggregate of $20 million. During World War I he volunteered for paramedical work at a Military Hospital in Antwerp, an experience which triggered in Bugatti the onset of depression, aggravated by financial problems arising because now he was no longer able to give so much time to his artistic work. At the same time Antwerp Zoo was forced, by feedstuff shortages, to start killing its animals, which deeply affected Bugatti because he had used many of them as subjects for his sculpture. In 1916, at the age of 31, he killed himself. He is interred in the Bugatti family plot at the municipal cemetery in Dorlisheim of the Alsace region of France. 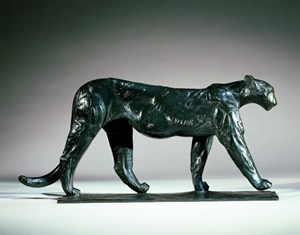 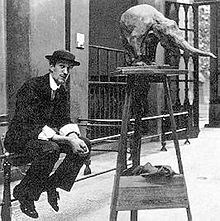