The French painter and graphic artist Bernard Buffet was born in Paris in 1929. In 1944, he begins to study at the "École des Beaux-Arts". As of 1945 he works as a free artist, his first gallery exhibition takes place in 1947, however, it is not crowned with success. In 1948 he receives the "Prix de la Critique" from the Paris art critics, this award makes him famous and his works are highly sought-after. The same year he is contracted by the Paris gallery David et Garnier where he exhibits his new works every year. His paintings often deal with one subject, such as views of certain cities, flowers, ships, insects etc. In 1955 he makes a series of paintings on the "Terrors of War". In 1957 he makes the "Scenes of Paris" his favorite subject, in 1958 he turns to "Joan of Arc". Bernard Buffet joins the Paris artists group "L' homme témoin" and develops his own unmistakable Neo-Realist style that has a socio-critical approach. Bernard Buffet's structured works are dominated by dark lines, which gives them a dramatic effect. In 1955 he is elected the most important post-war artist by the art magazine "Connaissance des Arts". The numerous self-portraits play an important role in his oeuvre. Besides paintings, Bernard Buffet also makes an extensive oeuvre of graphic art and also large sculptures. In 1973 the Bernard-Buffet-Museum is opened in Surugadaira, Japan, by the collector Kiichiro Okano, the museum is extended in 1988. In 1971 Bernard Buffet is appointed knight of the honorary legion and is also called to the Académie des Beaux-Arts in 1974. Bernard Buffet dies in Tourtour 1999, committing suicide as the Parkinson disease had limited his abilities so much that he was not able to paint any longer. 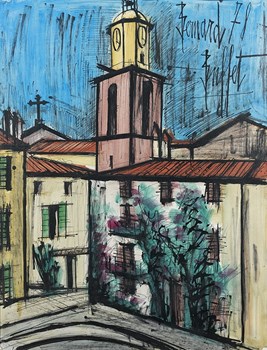 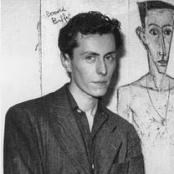