Walter Leblanc attended the "Koninklijke Academie voor Schone Kunsten" in his Antwerp from 1949 to 1954, and continued his studies in the "Hoger Instituut voor Schone Kunsten", graduating in 1956. In 1958, Leblanc founded the "G58 Hessenhuis group", a collective of young artists who presented avant-garde art exhibitions and performances in a renovated 16th-century warehouse named after the German city Hessen. Here Leblanc presented the exhibition "Anti-peinture"in 1962, the same year in which he became part of the "Nouvelle Tendance" movement and participated in the international exhibitions of Group ZERO. Leblanc began using torsion as the main pictorial element in his works in 1959. With twisted cotton threads stretched on a monochrome surface—usually white—the viewer’s changing perspective creates the illusion of movement, as changing light on the relief produces an optical distortion and vibration. Cotton was later replaced by monochromatic plastic levels or colored leaves of polyvinyl, painted a different color on each side. From 1975 Leblanc focused his work on pure geometrical forms: the triangle, square and circle and its derivates. Called "The Archetypes", it was a theme he used in the design of the Simonis metro station in Brussels in 1981. Leblanc began constructing sculptures in monumental dimensions in 1964, and became increasingly interested in the integration of his works into architectural spaces. His first solo exhibition was in 1961 at the "Palais des Beaux-Arts" in Brussels, and he would return to the same museum in 1968 with Walter Leblanc. In 1989, three years after Leblanc’s death, three museums organized retrospective exhibitions of his work: the Wilhelm-Hack Museum of Ludwigshafen, the Josef Albers Museum in Bottrop, Germany, and the Salzburg Museum in Austria. 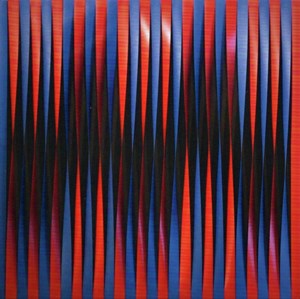 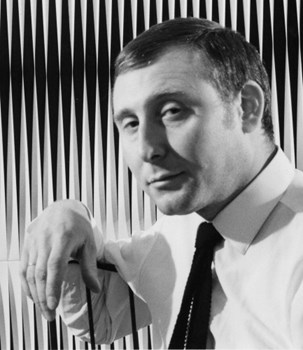