Lucio Fontana was born in Rosario di Santa Fé in Argentina as the son of Italian immigrants in 1899. His father was the sculptor Luigi Fontana. Lucio Fontana attended the "Instituto Tecnico Carlo Cattaneo" in Milan as of 1914. He served in World War I in 1917, however, he was dismissed as early as in 1918, because of an injury, so that he could complete his engineering studies. Fontana studied sculpting at the "Accademia di Brera" in Milan in 1920, but soon followed his family back to Argentina in 1922, where he worked in his father's sculpting studio. He had his own studio in Rosario di Santa Fé as of 1924. In 1928, he went back to Milan again and completed his studies at the "Accademia di Brera". Besides figurative sculptures, he also made terracotta reliefs and painted gypsum plates as of around 1930. In 1934, Fontana together with Fausto Melotti, Atanasio Soldati and Mauro Reggiani joined the Paris artists group "Abstraction-Création". They set up a manifesto on abstract art in 1935, Fontana's first one-man show with abstract works took place the same year in the Milan "Galleria del Milione". Lucio Fontana lived again in Argentina as of 1939, where he founded the private academy "Altamira" in 1947, he and his students at the academy composed the "Manifiesto Blanco", demanding the synthesis of artistic genres and the renunciation of traditional materials. Back in Milan in 1947, he founded the "Movimento spaziale" and wrote the "Primo Manifesto dello Spazialismo", demanding a new form of space-oriented art. Two years later he realized the projects "Ambiente nero" and the first "Ambiente spaziale" in the "Galleria del Naviglione": objects painted with fluorescent colours in a darkened room are illuminated by an ultraviolet light. He composed the second manifesto of the "Spazialismo" the same year, followed by the third in 1950 and the fourth in 1951. He executed the first perforated canvasses in 1949, they all carry the title "Concetto spaziale". Lucio Fontana pierced the canvas, thus opening the image area, entirely doing without the conventional illusionist means of composition. The series of the "Pietre" is made in the 1950s, stones and canvasses beset with pieces of colour glass that make for elevation that extend the image space into real space. In 1958, Lucio Fontana began to slash monochrome painted canvasses. As of 1960, he combined the holes and slits with pastose colour areas mixed with sand into which he made scratches. At a later point he made bronze objects, the "Nature", with gaping gashes and dents. The series of works called "La fine di Dio" is made as of 1963. Lucio Fontana belongs to the most important and most influential Italian artists of the 20th century, he died in Varese in 1968. 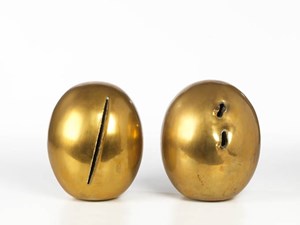 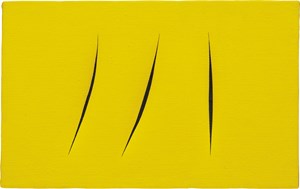