Pierre Soulages was born in Rodez in the South of France in 1919. At the age of 18, Soulages travelled to Paris where he visited museums and was fascinated by the artists Pablo Picasso and Paul Cézanne. In 1941, he was drafted into the army. His regiment was located in Montpellier, where he attended the "École des Beaux-Arts". There he also became acquainted with the abstract artist Sonia Delaunay. As of 1946, he maintained a studio in Courbevoie near Paris and established contact with artists such as Francis Picabia, Hans Hartung and Fernand Léger. In the following year his pictures were exhibited publicly for the first time in the "Salon des Surindépendants" and thus made accessible to a wider public. Already living in Paris he designed several stage sets between 1949 and 1952. Along with trips to Mexico and the USA, his visit to Japan in 1958 took on special significance. Early impressions of his country's austere Romanesque architecture and Celtic monuments as well as the later influence of East Asian calligraphy dominated his gestural, yet compositional well-balanced paintings with their black and brown beam fonts on light coloured bases. In his later works, Pierre Soulages used flat rubber spatulas or roll brushes as painting utensils, which influenced the aesthetic effect of his bulky works. As an important representative of the "Ecole de Paris" and informel art, Soulages was repeatedly represented at the "documenta" in the 1950s and 1960s. His first great retrospective took place in Hannover and The Hague as early as 1960. In the following years he received numerous international art awards, including the "Rembrandt Award" in Germany in 1976 and the "Great National Award for Painting" in Paris in 1987. In 1994, he was honoured in Japan with the "Praemium Imperiale" for painting. The execution of the 104 stained-glass windows for Conques abbey, the designs for which he had already begun in 1987, was completed in 1994. Soulages is the first living artist invited to exhibit at the state Hermitage Museum of St. Petersburg and later with the Tretyakov Gallery of Moscow in 2001. In 2007, the Musée Fabre of Montpellier devoted an entire room to Soulages, presenting his donation to the city. This donation includes twenty paintings dating from 1951 to 2006, among which are major works from the 1960s, two large plus-black works from the 1970s, and several large polyptychs. A retrospective of his art was held at the Centre Georges Pompidou in 2009. In 2010, the "Museo de la Ciudad" in Mexico presented a retrospective of Soulages. More recently a composition he created from 1959 was sold for 5 million euros at Sotheby's auction in London in 2013. 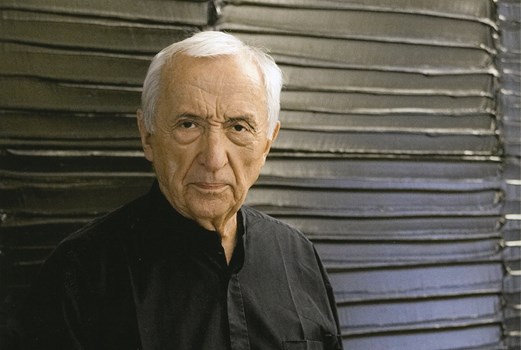