Alexander Calder was born into a family of artists in Pennsylvania in 1898. In 1919, he received an engineering degree from Stevens Institute of Technology in New Jersey. Calder attended the "Art Students League" in New York from 1923 to 1926, studying briefly with Thomas Hart Benton and John Sloan. As a freelance artist for the "National Police Gazette" in 1925, he spent two weeks sketching at the circus, his fascination with the subject dates from this time. He also made his first sculpture in 1925, the following year he made several constructions of animals and figures with wire and wood. Calder's first exhibition of paintings took place in 1926 at the Artist's Gallery in New York. Later that year, he went to Paris and attended the "Académie de la grande chaumière". In Paris, he met Stanley William Hayter, exhibited at the 1926 "Salon des Indépendants", and in 1927 he began giving performances of his miniature circus. The first show of his wire animals and caricature portraits was held at the "Weyhe Gallery" in New York, in 1928. That same year, he met Joan Miró, who became a lifelong friend. Subsequently, Calder divided his time between France and the United States. In 1929, the Galerie Billiet gave him his first solo show in Paris. He met Frederick Kiesler, Fernand Léger, and Theo van Doesburg and visited Piet Mondrian's studio in 1930. Around this time, he also encountered James Johnson Sweeney, future Guggenheim Museum director, who would become a close friend and supporter. Calder began to experiment with abstract sculpture and in 1931 and 1932 introduced moving parts into his work. These moving sculptures were called "mobiles"; the stationary constructions were to be named "stabiles." He exhibited with the group "Abstraction-Création" in Paris in 1933. In 1943, the Museum of Modern Art in New York gave him a solo exhibition. During the 1950s, Calder traveled widely and executed "gongs", sound mobiles developed around 1948, and "towers", wall mobiles developed around 1951. He won the "Grand Prize for sculpture" at the 1952 Venice Biennale. He exhibited, along with other pioneers of "Kinetic Art" including Yaacov Agam and Jean Tinguely, in "Le mouvement" at the Galerie Denise René in Paris in 1955. Late in the decade, the artist worked extensively with gouache; from this period, he executed numerous major public commissions. In 1964, the Guggenheim Museum presented a Calder retrospective. He began the "totems" in 1966 and the "animobiles" in 1971, both are variations on the standing mobile. A Calder exhibition was held at the Whitney Museum of American Art in New York in 1976, and the Guggenheim Museum Bilbao in 2003. Calder died in New York in 1976. 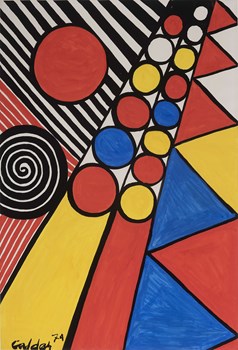 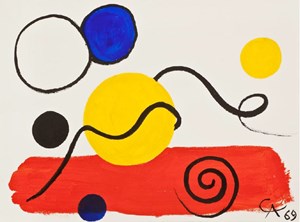 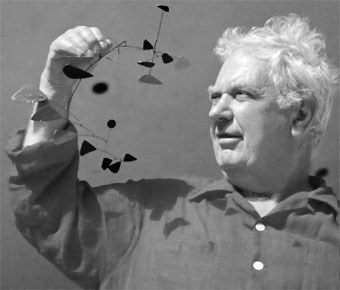