Marc Chagall was born in Vitebsk, Belarus, and was raised in a devoutly Jewish environment with eight other siblings. His father worked in a fish warehouse and his mother ran a shop where she sold fish and sundry baking supplies. As a child, Chagall attended Jewish elementary school and later went to public school, where lessons were taught in Russian. After learning the elements of drawing at school, from 1907 to 1910, Chagall studied painting in St. Petersburg at the Imperial Society for the Protection of the Arts, eventually under stage designer Léon Bakst. A characteristic work from this early period is "The Dead Man" from 1908, a painting that depicts a violinist amid a nightmarish rooftop scene. Chagall moved to Paris in 1910, and then moved into a studio on the edge of town in a Bohemian area known as "La Ruche". There, he met several writers and artists, including Guillaume Apollinaire, Robert Delaunay and Albert Gleizes. In such artistic company, experimentation was encouraged, and Chagall quickly began developing the poetic and innovative tendencies that had begun to emerge in Russia at the time. At the same time, he came under the influence of the Impressionist, Post-Impressionist and Fauvist pictures he saw in Paris museums, and was introduced to Fauvism and Cubism. Before long, he was participating in the "Salon des Indépendants" and the "Salon d'Automne" in 1912, annual French exhibits, staging his first solo show in 1914 in Berlin to great adulation. This period, during which he created several images of his childhood and hometown of Vitebsk is considered Chagall's strongest, artistically, and the style he developed would remain with him for the rest of his life. After the Berlin exhibition, Chagall returned to Vitebsk, where he intended to stay long enough to marry his fiancée Bella. A few weeks later, though, he was stranded by the outbreak of World War I, as the Russian borders were closed indefinitely. Instead of despairing, Chagall embraced local scenes in his art, working at the time in an unusually realistic style. At first, Chagall was enthusiastic about the Russian Revolution of October 1917, and he decided to settle in Vitebsk. In 1918, he was appointed commissioner for art, and then founded and directed the Vitebsk Popular Art School. Disagreements with the Suprematists resulted in Chagall's resignation from the school in 1920, after which he moved to Moscow, there undertaking his first stage designs for the State Jewish Chamber Theater. Chagall then left Russia for good. After a stop-over in Berlin in 1922, the artist returned to Paris in 1923 with his wife and daughter; his first retrospective took place there the following year, at the Galerie Barbazanges-Hodebert. Chagall had learned engraving while in Berlin, and he received his first engraving commission in 1923, from Paris art dealer and publisher Ambroise Vollard, for creating etchings to illustrate a special edition of Nikolay Gogol's novel Dead Souls. Over the next three years, Chagall completed 107 plates for the Gogol book, 100 gouaches for poet Jean de La Fontaine's Fables, and a series of etchings illustrating the Bible. During the 1930s, besides painting and engraving, Chagall traveled extensively to the Netherlands, Spain, Poland, Italy and Palestine, where he stayed for two months, visiting the Holy Land to inspire his Bible etchings. In Palestine in 1931, Chagall immersed himself in Jewish life and history, and by the time he returned to France, he had completed 32 of biblical plates. With Hitler rising to power, a full-blown war was waged in Germany against artists, and, subsequently, anything deemed modern or difficult to interpret being confiscated and burned. The once-impressed German press now turned on Chagall, and in response, Chagall's paintings struck a different tone, with terror and persecution taking on foreground roles. In "Solitude" from 1933, Chagall's anxiety over the fate of humanity is represented by an atmosphere of despondency and in the figure of the huddled, pious Jew; in "White Crucifixion"from 1938, Jewish and Christian symbols are mixed in a depiction of a Nazi crowd terrorizing Jews. The artist would be dealt another blow in 1939, when Ambroise Vollard died and Chagall's various etching projects were put on hiatus. With the outbreak of World War II, Chagall moved to the south in France, as the Nazi threat became increasingly real for European Jews. A group of Americans ran a rescue operation smuggling artists and intellectuals out of Europe to the United States via forged visas, and Marc Chagall was one of more than 2.000 who escaped this way. He arrived in New York with Bella in 1941, the day after Germany invaded the Soviet Union and spent most of the next few years in the New York area. In New York, Chagall continued to develop his signature themes, but in 1942, a new commission came his way: to design the sets and costumes for a new ballet, Aleko, by Léonide Massine, which would stage Pushkin's The Gypsies and be accompanied by the music of Tchaikovsky. When Aleko—Chagall's first ballet—premiered on September 8, 1942, it was a great success. Also during this period, Chagall designed the backdrops and costumes for Stravinsky's ballet "The Firebird", another success. The course of Chagall's life and art was changed yet again in 1944, when his wife, Bella, passed away. Thereafter, depictions of memories of his wife recurred in Chagall's work; she appears in several forms. Before moving back to France for good in 1948, Chagall was honored with retrospective exhibitions at both the Museum of Modern Art in New York and the Art Institute of Chicago. 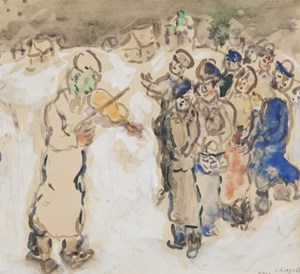