Georges Mathieu was born in Boulogne-sur-Mer in 1921. He moved to Versailles at the age of 12 and studied Greek, Russian, and Spanish at the Lycée Hoche. His education continued at a variety of institutions in Rouen, Cambrai, and Douai, all in France, where he entered law school in 1941. A self-taught painter, he began his artistic career in 1942, making mostly landscapes and portraits. His professional life extended beyond painting to include such positions as interpreter for the U.S. Army in 1944 and later professor of French at the American University in Biarritz. Soon Mathieu began working with abstraction, citing Edward Crankshaw's Joseph Conrad: "Some Aspects of the Art of the Nove" from 1936 as a source for his investigation. His early abstract work consists of amorphous shapes and experimentation with drip techniques. In 1947 Mathieu moved to Paris, where he worked as the head of public relations in the American transatlantic shipping company United States Lines. While in Paris, he quickly became attracted to the work of artists such as Camille Bryen and Wols, which he referred to as "Abstraction lyrique." Within his first year there, he organized "L'imaginaire" at Galerie du Luxembourg to promote Lyrical Abstraction. In addition to these activities, he engaged in philosophical and theoretical issues pertinent to developments in "Art Informel". In 1949, Mathieu participated in the group exhibition "Huit oeuvres nouvelles", which also included works by Jean Dubuffet, Jean Fautrier, Maria Martins, and Wols. In 1950, Mathieu painted his first Tachiste works and had his first solo exhibition at the Galerie René Drouin in Paris. Mathieu's calligraphic gestural style is partially indebted to Hans Hartung, another artist associated with Tachisme. One of the first European vanguard artists to recognize the importance of American counterparts, namely Jackson Pollock, Mathieu also formed a close association with the group Gutai Bijutsu Kyōkai in Japan in the late 1950s. Mathieu often squeezed paint directly from tubes onto the canvas and emphasized the necessity of rapid execution in order to harness an intuitive expression. Many of his titles refer to battles or other events in French history; in fact he identified his work as aligned with history painting, but he depicted monumental events in an abstract manner. On several highly publicized occasions, Mathieu introduced a performative dimension to his painting, executing large canvases before audiences while dressed in costume. In Tokyo in 1957, he made 21 paintings in three days. This merging of painting and performance anticipated the work of Yves Klein and other artists of the late 1950s and 1960s. In the early 1960s Mathieu also experimented with other mediums, making his first monumental sculptures in 1962. He likewise continued to publish his theoretical writings. Mathieu began to exhibit internationally in 1952. In addition to his first one-person exhibition at Galerie Drouin, he had solo shows at Stable Gallery in New York in 1952; Galerie Rive droite in Paris in 1954; and Kootz Gallery in New York, where he exhibited regularly throughout his life. Other notable solo exhibitions took place at the Institute of Contemporary Arts in London in 1956; Museu de arte moderna in Sao Paulo in 1960; Musée d'art moderne de la Ville de Paris in 1963; a retrospective at the Grand Palais in Paris in 1978; and at Jeu de Paume in Paris in 2002. His work was also shown in the seminal exhibition "Véhémences confrontées", which visually pitted European Lyrical Abstraction against American Abstract Expressionism and for which Mathieu assisted French critic Michel Tapié in organizing at Galerie Nina Dausset in Paris in 1951. 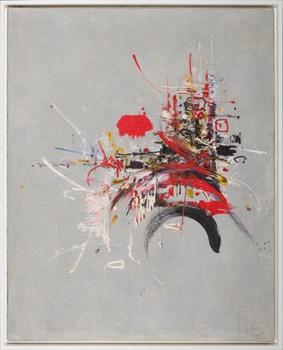 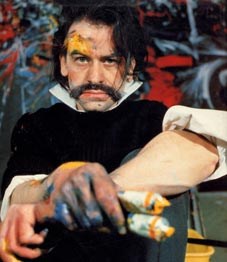