Amedeo Modigliani was born in Livorno in 1884 into a rich merchant Jewish family. Versed in literature and art at an early age, Modigliani took his first lessons in drawing and painting between 1898 and 1900 at Guglielmo Micheli's studio. Amedeo Modigliani was particularly fond of the Italian Early Renaissance. In 1902, Modigliani shared a studio in Florence with Oscar Ghilia and became a pupil at the free school for drawing from the nude. A year later Modigliani transferred to the Venice Academy, where he spent a great deal of time studying the works of the Old Masters and became familiar with international movements in art. Modigliani went to Paris in 1906 to study at the private Colarossi Academy. In 1907, he met a young physician, Paul Alexandre, who was the first person to promote his work. Alexandre not only bought paintings and drawings of Modigliani's; he also helped to arrange the artist's first commissions. That same year, Modigliani showed work at the "Salon d'Automne" and a year later at the "Salon des Indépendents". The few pictures by Amedeo Modigliani to have survived from that period reveal the influence of the Fauvist artists Matisse, Toulouse-Lautrec, Picasso and Cézanne. Paul Alexandre introduced Modigliani to the sculptor Constantin Brancusi and Modigliani began to sculpt under his influence, but he gave up sculpture in 1914-15 to devote himself to painting. The same salient features are common to both Modigliani's sculpture and his painting: despite mask-like stylization, a poignant grace and spirituality inform Modigliani's heads. His lasting fame rests on the portraits of artists he did after 1914. On the outbreak of the First World War, Amedeo Modigliani volunteered for service but was exempted for health reasons: two severe attacks of tuberculosis had left him weakened for the rest of his life. Modigliani began to work with the art dealer Paul Guillaume and was also supported by the Polish poet Léopold Zborovski and his wife, doing many portraits of both. Modigliani's first one-man show was opened by the Galerie Berthe Weill in 1917, but was closed after only a few hours because his nudes caused a public scandal. Modigliani left Paris while it was under German siege in 1918 and went to Nice with his mistress, Jeanne Hébuterne. There he did some of his best known pictures and some of his few landscapes. In May 1919, Modigliani returned to Paris and went to England several times, thus ensuring the successful sale of his work there. Early in 1920, however, Amedeo Modigliani again fell ill of tuberculosis and died in Paris. 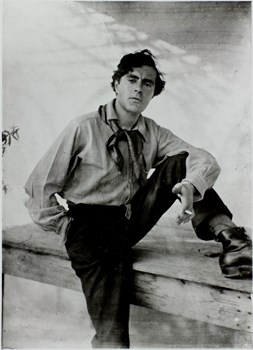