Roberto Matta was born in Santiago in 1911. Matta was educated in his native country as an architect and interior designer at the Sacré Coeur Jesuit College and at the Catholic University of Santiago from 1929-31. In 1933, he became a Merchant Marine which enabled him to leave Santiago and travel to Europe. From 1933-34, he worked in Paris at the atelier of the famous architect Le Corbusier. At the end of 1934, Matta visited Spain where he met the poet and playwrighert Federico García Lorca, who introduced Matta to Salvador Dalí whom encouraged him to show some of his drawings to Andre Bréton. Matta's acquaintance with Dalí and Breton strongly influenced his artistic formation and subsequently connected him to the Surrealist movement, which he officially joined in 1937. He was in London for a short period in 1936 and worked with Walter Gropius and László Moholy-Nagy. Matta's employment with the architects of the Spanish Republican pavilion at the Paris International Exhibition, exposed him to Picasso's Guernica at the Prado museum in Madrid in 1937, which greatly impressed him and influenced him in his work. At this time, he was introduced to the work of Marcel Duchamp, whom he met soon after. He later went to Scandinavia where he met the architect Alvar Aalto and then to Russia where he worked on housing design projects. The summer of 1938 marked the evolution of Matta's work from drawing to painting. He completed his first 'Inscape' oil paintings while in Brittany and working with Gordon Onslow Ford. Forced to leave Europe with the outbreak of war, Matta arrived in New York City in the fall of 1938. In an article by Kathy Zimmerer of Latin American Masters, she describes Matta's "Crucifixion" from 1938 as "evolving biomorphic forms that mutate and flow across the surface of the canvas. Matta's fluid realm of space cushions their journey. His luminous palette of deep crimson, yellow, blue and black, defines and outlines the organic forms as they undergo metamorphoses." "Crucifixion" is representative of a non-figurative period of Matta's work where he developed his palette and use of colour to create energized forms and space. Consistent with his later works and with Surrealist theories of practice, Matta began his exploration of the visionary landscape of the subconscious. Matta looked to his friend and mentor Yves Tanguy whose works recall the hellscapes and allegories of 15th and 16th century Dutch artists such as Bosch or Brueghel. In addition, both Matta and Tanguy create a universe that is simultaneously firey and chilly that is often connected to their own social consciousness of the ongoing war in Europe. In addition to Tanguy's strong influence, there are parallels between Picasso's "Guernica" and Matta's "Crucifixion". Both works of art motivated by their respective spiritual and social consciousness. In Guernica, Picasso emphasizes the "spiritual hideousness of which mankind is generally capable". Matta focuses on the spiritual effect of the machinations of war. The visual landscape he creates connects us to each other, implying that when we declare war on others, we are really waging war with ourselves. These ideas are embodied in fluid forms and in their fluidity, texture, and contrast. Matta's style and willing exploration of the surrealist philosophy of "automatic composition" heavily influenced the development of the Abstract Expressionist school and their exploration of Action painting. Matta first exhibited in the Julian Levy Gallery in New York in 1940. The 1940s signified the re-entry of the human figure into his compositions creating a compositional dialogue of Man versus the Machine. The forms he created were organic and existed in symbiotic relationships with machines. In 1947, Matta was expelled from the surrealists' group, and he returned to Europe. By the 1950s and he established homes in Rome, Paris, and London. He visited Cuba in the 1960s to work with art students. In 1962, he was awarded the Marzotto Prize for "La Question Djamilla", a protest of the French-Algerian war. His work of the 1960s tended to have distinct political and spiritual intentions. Much of his work consisted of themes related to political events occurring in such places as Vietnam, Santo Domingo, and Alabama. An exhibition of 1968 at the Iolas Gallery in New York displayed much of this work. The 1960s marked not only a change in his themes, but in his style. He found influences in contemporary culture while remaining close to his Surrealist roots. His work can generally be split into two areas: cosmic and apocalyptic paintings. "Elle s'y gare", is an example of the cosmic arena and what Andre Breton called "absolute automatism". The idea of automatism was a key element of the Surrealist movement, which emphasized the suppression of conscious control over a composition in order to give free reign to the unconscious imagery and associations. Matta used automatism in a manner that allowed one form to give rise to another until unification was achieved or until further elaboration destroyed the composition. These "chance" compositions are exploited with a fully conscious purpose. The artist takes over. As Chilean painter, printmaker and draftsman, Matta left Chile as a young man and did not like to be thought of as a "Latin American" artist. He was certainly one of the few Surrealist artists to take on political, social, and spiritual themes directly and without abandoning the biomorphic mutations he is known for and without resorting to social Realism. 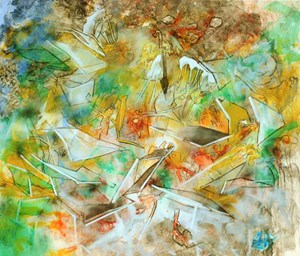