Pino PinelIi was born in 1938 in Catania in Sicily, where he made his studies. In 1963 he moved to Milan, where he still lives and works. ln those years, he was attracted and fascinated by the artistic debate, which was truly alive thanks to personalities as Lucio Fontana, Piero Manzoni, Enrico Castellani. He took part in the San Fedele Prize and in 1968 his first solo exhibition was hold at Bergamini Art Gallery. At the beginning of the 1970s, Pinelli opened an experimental phase in his work. He focused on the pictorial surface and its vibrations, exploring the essential connection between tradition and innovation. The "Topologies and Monochromes" series were realised in this period. Surfaces became slightly uneasy, as if the artist wanted to show us the tension of painting itself. These works made him one of the leading artists of the "Analytical Painting movement", as it was defined by the art critic Filiberto Menna. Nevertheless, from 1976 Pinelli decreased the size of his paintings. Hanged on the walls, one next to the other, his paintings looked Iike broken into fragments by an explosion and disseminated into space. The artist put aside canvas and stretcher to focus on the concept of painting itself. The art critic Giovanni Maria Accame wrote in the monography of Pino Pinelli "continuità e disseminazione" the following : “For Pinelli, the idea of painting limited by edges, falls through these buckskins. He introduced, instead, the concept of a painting in perpetual moving inside the phenomenal changing world. The exodus from the picture does not deny itself, but it offers, on the contrary, a different point of view. Painting is explored in a different way but, at the same time, it explores an absorbing and never finished space. Painting squeezes itself to expand and it hides to reveal itself”. Pinelli’s works are fascinating beyond the analytical painting lables. They are unsettling particles wandering through space in wide or small combinations, bringing memories of an impatient flexibility on their own skin. They show the tactile physicality and visual beauty of colours releasing light vibrations. 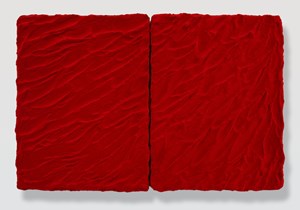