Giacomo Manzù, his original name was Giacomo Manzoni was an Italian sculptor who, in the mid-20th century, revived the ancient tradition of creating sculptural bronze doors for ecclesiastical buildings. His sober Realism and extremely delicate modeling alternately achieved austere severity and sensuousness of form and surface, lending a new spirit of vitality to figurative bronze sculpture. Manzù had to leave school at an early age to learn a trade, and he was apprenticed to local craftsmen who taught him to carve wood and to work in metal and stone. After service in the Italian army from 1927 to 1928, Manzù went to Paris to try his luck as a sculptor, but after three weeks he collapsed from hunger and was deported back to Italy. He settled in Milan, and, after receiving a commission in 1929 to decorate a chapel at the Catholic University, he devoted himself to sculpting full time. Manzù’s early works were nudes, portraits, and biblical subjects, executed in a style that at first was influenced by Etruscan, Egyptian, and medieval art. However, he soon adopted the Impressionist techniques of the Italian sculptor Medardo Rosso. Manzù visited Rome in 1934, a trip that inspired him to concentrate on religious themes. In 1938, he sculpted the figure of a Roman Catholic cardinal, initiating a series of more than 50 seated or standing cardinals. He also sculpted many tender portrayals of female nudes. Manzù’s most noteworthy work of the war years was "Francesca", a seated nude that won the Grand Prix of the Rome Quadriennale in 1942. In 1948, Manzù was awarded the first prize for Italian sculpture at the Venice Biennale. Two years later he was commissioned to create a set of monumental bronze doors for St. Peter’s in Rome. The portal was dedicated in 1964, after the death of Pope John XXIII whose official portrait Manzù had executed. Among his other commissions were doors for Salzburg Cathedral in 1958, and the Church of Sankt-Laurents in Rotterdam in 1969, and also a relief "Mother and Child", for Rockefeller Center in New York City in 1965. 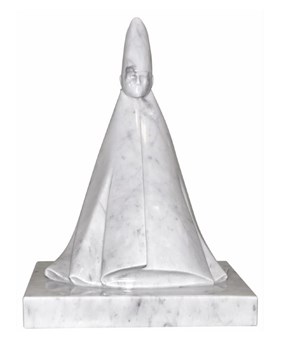 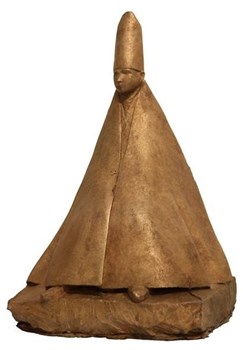