Takesada Matsutani is a Contemporary Japanese mixed-media artist born in 1937 in Osaka. He was a member of the Gutai group from 1963 to the dissolution of the group in 1972. His well-known work involves a technique of blowing a gust of air into a puddle of vinyl wood glue, creating bulges, bubbles, and drips, then covered by patient strokes of graphite pencil. Matsutani’s works are represented in a large number of prestigious art museums and collections around the world. In 2002 the artist, who has lived a large part of his childhood in Nishinomiya, received the Nishinomiya City Cultural Award. Matsutani enters in 1954 the class of traditional painting (Nihonga)at the Ôsaka Municipal High School of Crafts Arts (Ôsaka Shiritsu Kogei Gakkô). But, suffering from tuberculosis from 1951 to 1959, he frequently misses school and decides to study Japanese painting on his own, discovering at the same time Western contemporary art through books and magazines. During his long days of confinement, the artist also develops an interest in textures, leading to works close to Surrealist collages and inspired by the images seen on the ceiling of his bedroom. Matsutani first presents his work at the 8th Nishinomiya Art Exhibition in June 1957, attracting the attention of a judge from the Nihonga section, Shôsaku Arao, who offers to become his teacher. Arao is a painter both faithful to tradition and interested in Western art, particularly in abstraction and cubism. He has a great influence on his pupil, who starts creating and exhibiting Western style works as well as Nihonga. From 1959, Matsutani attends the drawing class of the Nishinomiya Civic Art Class, where he makes the acquaintance of Sadamasa Motonaga, one of the members of the Gutai association. Matsutani therefore participates in Gutai’s exhibitions from 1960. Jirô Yoshihara, the founder and mentor of the association is not immediately impressed by Matsutani’s works, but finally accepts the young artist in the association. in 1963, on the occasion of Matsutani’s first solo exhibition, at the Gutai Pinacotheca in Ôsaka. From then on, Matsutani participates to all of Gutai’s group shows, until the dissolution of the association in 1972. From the beginning of the 1960s, Matsutani shifts from Nihonga to a more abstract style, experimenting with materials. Vinyl adhesive becomes his favourite tool, covering the canvas in circles or bubbles of which some burst, created by spreading air into the material with a straw, before drying the glue with a fan or an hair-dryer. Matsutani takes part of his inspiration in the organic shapes observed through a microscope in the laboratory of a friend. Very sensuous, the works are infused with a latent eroticism. Matsutani’s first Parisian works are close to the contemporary researches of Hard-Edge. In 1967, Matsutani enters the Atelier 17, Stanley William Hayter’s engraving studio. Matsutani becomes Hayter’s assistant and meets at the studio his future wife, American artist Kate Van Houten. Despite Hayter’s predilection for colour, Matsutani admits having mostly understood during his years at the studio the potentials and the evidence of black, already perceived while he was studying Japanese traditional art. Black and white, which the artist considers as characteristics of Japanese culture, therefore prevail in Matsutani’s works. After his years at the Atelier 17, Matsutani focuses on silkscreen, and shares a studio in Montparnasse with Kate Van Houten. A large part of his work then consists in taking photographs of his Objects, made with canvas and glue, and to recreate these pictures in silkscreen. Matsutani also works at the time for other artists, such as Kumi Sugai. At the end of the 1970s, Matsutani goes back to three dimensional works combining vinyl adhesive and gaphite pencil. Patiently covering the canvas or paper with pencil strokes, the artist questions the concepts of space and time, immobility and movement. Remaining most of the time faithful to the two dimensions of canvas or paper work, he brings life to the surface, letting vinyl adhesive inflate or flow, leaving the door open to unexpected results, full of sensuality and of an unusual tactility. From 1979, Matsutani has been regularly making installations, covering long bands of paper with strokes of graphite pencil, only breaking this regular rhythm at the end of the paper with the help of White Spirit. At other times, ink slowly falls out of pierced and hung canvas bag, drop by drop covering a piece of canvas or paper stretched underneath. These in situ works take their surrounding space into account, leading a silent dialog with it. In 2000, Matsutani created the set of the theater play Blesse, ronce noire, written by Claude Louis-Combet and presented at the theatre of Evreux. 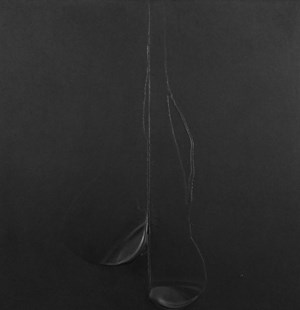 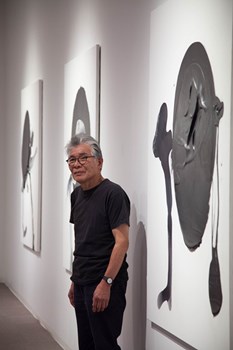