Johan Chamberlain grew up in Chicago and, after serving in the navy, attended the Art Institute of Chicago from 1951-52 where he specialised in welded sculpture. He studied and taught at Black Mountain College in 1955 for two years, before moving to New York and began to incorporate automobile parts into his abstract creations. Considered one of the most important American Post-War sculptors, Chamberlain is known for his experimental use of industrial metal and Plexiglas. Continuing to explore new methods, the artist took up photography in the last decade of his life, creating dramatic images that focused in on his bold approach to colour. The artist received a Lifetime Achievement Award in Contemporary Sculpture from the International Sculpture Center in Washington, D.C., in 1993, and a Distinction in Sculpture Honour from the Sculpture Center in New York in 1999. 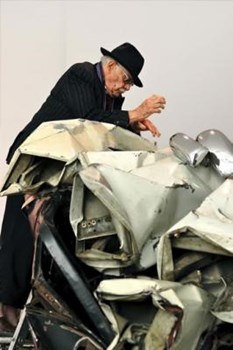