Kim Tschang Yeul is a South Korean painter born in Maengsan, South P'yŏngan province, Chōsen, in Japanese occupied North Korea, in 1929. Kim Tschang Yeul is part of the first generation of modern artists in South Korea. He is a prolific painter well known for his 'water drop' paintings, and has been one of the most influential figures in modern Korean art history. Although he started out as part of the "Art Informel" movement in South Korea, he has lived most of his adult life in Paris, France, where he developed his own unique style of painting. After graduating from the College of Fine Arts at Seoul National University in 1950, Kim led the Korean "Art Informel" movement with Park Seo-Bo, Se-Ok Suh, Ha Chong-Hyun, and Chung Chang-Sup in the 1950s and 1960s. This movement greatly inspired many avant-garde artists of the next generation in rejecting the conservative values imposed on them by Korean institutions. Shortly after his participation in the Paris Biennale in 1961 and the São Paulo Biennale in 1965, Kim moved to New York City and studied at the Art Students League of New York from 1966 to 1968. Kim Tschang Yeul's time spent in New York City allowed him to interact with and be inspired by the Pop art movement, which was a significant influence on him. Because of his years abroad, Kim Tschang-Yeul developed his art outside of the Seoul and Tokyo art scene, developing his unique style parallel to the "Dansaekhwa" movement. In 1969, Kim moved from New York City to Paris, where he continued depicting opaque abstract liquid forms. WIth time, the liquid abstract forms transformed into spherical, transparent 'water drops', which have become his distinctive, trademark style after the mid-1970s. The water drops have been Kim’s focus for the past five decades. He has pursued the painting of water drops between Seoul and Paris, where he lives and works. Kim’s water drop paintings speak a language that amalgamates the discourses around photorealism and abstract expressionism, situating themselves in an ambiguous space between reality and the abstract. According to Kim, he does not interpret his subject as realistic depictions of actual water drops, but “idealistic” ones. Kim explains that the continued act of painting water drops helps him erase painful and traumatic memories of serving in the military during the Korean War between 1950 and 1953, where he witnessed the deaths of his fellow soldiers. In a way, the incessant act of painting water drops served as a therapeutic tool for him, bringing his art closer to surrealism and spirituality. Many have speculated about the meaning behind his obsession with water drops. In 2017, he was awarded the Officier medal of the "Ordre des Arts et des Lettres" bestowed by the Embassy of France in Seoul. In 2016, the government of Korea opened the Kim Tschang Yeul Museum of Art in Jeju, Jejudo island, South Korea, the highest honor bestowed upon a living Korean artist .Many works by the artist have been sold at auction, including 'Gouttes d'eau' sold at Korea Premier Auction 'K Auction 2016 May Hong Kong Sale' in 2016 for $2,300,000. 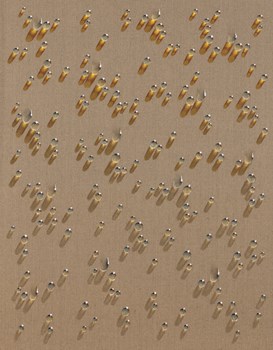 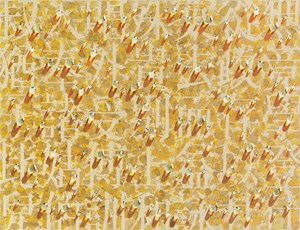