Zao Wou-Ki was born in Beijing, China, and studied calligraphy and painting at the School of Fine Arts in Hangzhou. He moved to Paris in 1948 and his early exhibitions were met with praise from Miró and Picasso. Influenced by the work of artists such as Klee, Matisse and Cézanne, he began to develop a synthesis between Eastern calligraphy and European Art Informel. In 1957, Zao met New York gallerist Samuel Kootz, who encouraged him to paint large-scale works with looser, more gestural brushstrokes. From the 1960s on, his paintings were focused around space and movement, often hovering between nature and abstraction. His expressionist take on Chinese painting transcended east and west with visions of the subconscious. During the 1990s Zao Wou-Ki received numerous honorary doctorates, as well as the Japanese Premium Imperial Award, and exhibited at the 1996 Venice Biennale in 1996. 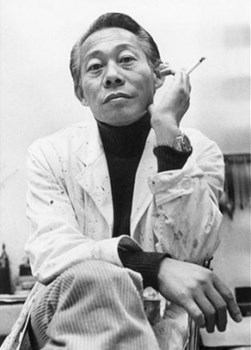